HISTORY AND DRAMAS OF THE CAPITAL

An excellent air offer convinced me to go to the German capital.

I will also talk about a not too conventional Berlin, with attractions away from traditional destinations.

The German capital certainly has much to show, given the events that have marked its history.

You could imagine yourself in the GDR or in West Germany, depending on the part of the chosen Wall, or go back further in time, when the swastikas tried to expand everywhere, until on Berlin waved the red flags as the blood shed by 28 million of Soviets died in WWII.
Unfortunately, however, I also saw a lot of Christiane F. in the subway and in some corner hidden by too many prying and indifferent eyes, as if Berlin was still that Zoo from whose cages the boys can’t get out.


Schönefeld from 1947 to 1990 connected East Berlin, capital of the DDR, to the various communist nations. Now it has a traffic of about 9,000,000 passengers a year but lives a controversial renewal that began in 1996 but with continuous problems.
Part of its area should be incorporated into the new and unique city airport:Brandenburg. The start activity date scheduled for 2007 is constantly changing, up to the last hypothesis of 2021.

Despite the expected closure in 2017, the main airport therefore remains Tegel.
This is an important European hub, and if you only use it as a stopover, you can spend the night in Terminal A. The interior is safe and controlled.
Nightly cleaning could disturb your sleep, unless you prefer the bed inside the reserved cabins, at the non-economic minimum price of 30 euros.
The airport is very well connected to the city center by bus.

The fourth airport is an attraction for me to see.
Tempelhof, where Lufthansa was founded in 1926, remained active until 10/30/2008.
It is now the largest public park in Berlin.
You can walk freely on the slopes imagining you have occupied what was the largest airport in the world. And maybe you’ll look at the sky with the feeling that a boeing is about to land near you.
Surely you will live a unique experience. Only beatable by Tuvalu, the state in the Pacific Ocean where the runway of the Funafuti International Airport is used as a town square.

The Hauptbahnhof station (so called by the government although most Berliners preferred to keep the name of the historic Lehrter Bahnhof station) is Berlin’s central station, obviously the largest in Europe.
Considering it only a station is very simplistic. In its 5 floors there are not only trains, metro, trams and buses but 3 floors are dedicated to offices, shops and supermarkets. Its futuristic steel and glass structure surely leaves visitors and the nearly 300,000 passengers who travel daily surprised.

Potsdamerplatz wants to be the symbol of the new Berlin, modern, technological, futuristic.
But it seemed to me that the desire was to create a present and a future away from the signs of the past.
I don’t know how much this has succeeded or however possible.
Germany has its ghosts of the past and, even if try, it can’t get rid of them.
The Wall’s portions also present in this square are an example.

Alexanderplatz was considered the center of East Berlin and is one of the classic destinations in a visit to Berlin.
In reality it isn’t beautiful, unless you are attracted to restaurants and shopping.

One of the symbols of the square is the Universal Urania Weltzeituhr Watch. The column resting on a wind rose, is surmounted by a cylinder divided into 24 faces, one for each time zone, where the main cities of reference are written.
Above the cylinder rotates a representation of the solar system, with the planets and their orbits.

Not far away, with its 368 meters, the Television Tower looks Germany from above.
Built by the DDR’s post office between 1966 and 1969, besides its function as a radio and television broadcaster, it allows you to watch the panorama from the revolving bar and restaurant at 203 meters high.

The Holocaust Memorial (or Shoa Memorial or for the murdered european Jews) is composed of 2,711 dark gray cement blocks of varying heights.
I really can’t understand and appreciate modern art and honestly I didn’t feel any emotion in this place. A cement block is insignificant and does not make me think about the Holocaust. 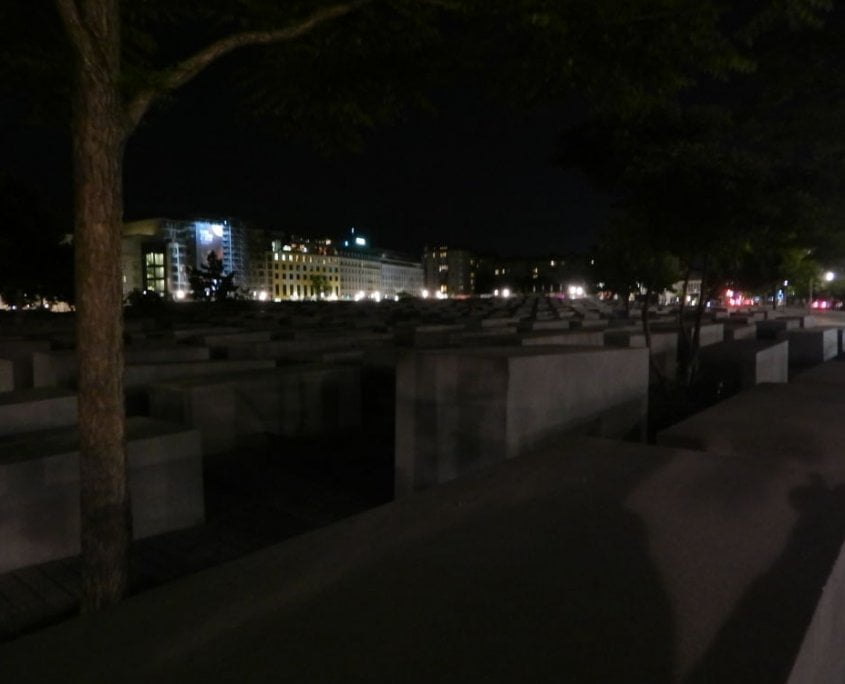 The Brandenburg Gate is the symbol of Berlin. Born as a gateway to the city of Berlin, it became the fulcrum of Hitler’s Nazi parades and then the symbol of the divided Berlin. It was in fact in no man’s land, between the barbed wire in the east and the wall.
Now it obviously represents the reunification of the city.

Berlin during the WWII


Honestly, I have always thought of finding many references to Nazism in Berlin. This is only partially true.
In every city I visit I try to find places of my interest.
I didn’t expect to find many in Germany and it was a pleasant and unexpected surprise.
History is written by the winners, so there are many references to the Soviet Union.

Leaving the Brandenburg Gate behind and entering the tree-lined avenue, the Soviet War Memorial of Tiergarten is on the right after 400 meters. The 2 tanks T34 are really those among the first entered Berlin in the final battle of the Second World War, which ended May 9, 1945 with the Soviet victory and the Nazi surrender.
From the altar in classic Soviet style, stands the statue in honor of the soldiers of the Red Army.

A short distance away, as if closing a hypothetical triangle, there is the Reichstag Palace, another place where passed fundamental events of world history.
Its fire in 1933 opened the way to Hitler and Nazism, which came to a symbolic end when the Red Army conquered Berlin, flying the red flag with hammer and sickle over this symbol of the Third Reich.
The photo became historical:

Over 7,000 Soviet soldiers killed in the final battle of Berlin are buried in the Memorial of Treptower Park, the largest outside the borders of Russia.

At the entrance, we are greeted by the statue of suffering Mother Russia, which pushes us along the long avenue towards two kneeling Red Army soldiers who are mourning their dead companions.

Above the staircase is the large statue of the victorious Soviet Soldier, with a child in his arms and a sword in his other hand, while with his boot destroys the swastika and Nazism.

Near the Potsdamerplatz is the Topography of Terror. In this area was the headquarters of the Gestapo, the palace of the SS and security services.
You should spend more than an hour to read all the documents and reflect on the photos that explain the birth and rise of Nazism until the Nuremberg criminal trial.

Berlin divided by the wall: East and West Germany

Adjacent to Potsdamerplatz is the only standing watch tower of East Germany.
Almost invisible and without indications, it is a place to visit.
You can climb the ladder and see the view of the military from this narrow place.

Perhaps you will have heard about Checkpoint Charlie. From here passed Soviet soldiers, American soldiers, diplomats and journalists. In 1961 the risk of the outbreak of the Third World War was very high when Soviet and American tanks were deployed opposite.
Now you can see a copy of the American gatehouse and the signs of that time, written in English, Russian, French and German. In front, to underline the current tourist and commercial symbolism, McDonald’s could not be missing.

Berlin from the sky and from underground


An unmissable experience for those who don’t have vertigo problems, is seeing Berlin from the top … of a hot air balloon! After a quick ride to nearby Checkpoint Charlie, I certainly didn’t miss the opportunity and I came down satisfied with my choice.
The hot-air balloon is held by a steel cable and rises to about 150 meters. Being obviously all open, it is possible to take better pictures than from the TV Tower.

It’s also exciting to take part in an underground tour. You can visit the shelters used by civilians during the Second World War, the fallout bunkers built by West Germany, the tunnels and ghost stations used during the Cold War.
The guides are very prepared and you will touch the story that will be explained.
The only flaw, which I always find absurd, is the ban on taking pictures.

Ultimately, Berlin was a pleasant surprise.
A huge city on which history has passed over and over again.
Heavy stories made of deaths, suffering and liberations.
Stories that some people perhaps would like to erase and forget.
But without the past is impossibile to think about present and future.

Festival of San Fermin: running of the bulls in Pamplona

Nazca lines: the work of evolved civilizations, aliens or whatever?