OSLO: FIRST STOP ON A TRIP TO NORWAY

On my last trips I chose physically hard ones, thinking that afterwards it will be more difficult to do similar experiences.
That’s why I had imagined going to Scandinavia in the future..
Instead some coincidence changed my plans and I decided to go to Norway before.
I never visit a country without going through its capital. And Oslo was the first destination of my long trip.


I had always associated Norway with snow, cold and northern lights. But of course there’s much more.
Norwegians have great maritime traditions, from Vikings toArcticexplorations. And not only that…

Is it possible a low cost trip to Norway? Maybe… but it’s very difficult..
Obviously the personal standards are different but you could take some precautions.
In Oslo for example Oslo Passis essential.
The cost is high (about € 40.00 for 24 hours, € 60.00 for 48 hours, € 75.00 for 72 hours) but it includes access to all museums, attractions and public transport, as well as discounts in some restaurants.
Admission tickets to the various museums are expensive and if you visit the major attractions, you would spend more than the cost of the Oslo Pass.


Seldom has an Information Centre really helped me, but that doesn’t apply in Oslo.
As soon as you arrive, you should just start at the Oslo Visitor Centre, inside the train station.
Someyoung people welcome you with the utmost kindness and answer every quick question.
For more detailed information or to buy tickets and subscriptions you have to take the number and wait in line. Sometimes you have to wait a long time so you could read the various tourist brochures, rich in details and available in many languages.


Alfred Nobel became rich thanks to the 355 patents filed following his experiments about explosives (he invented also dynamite).
When his older brother died in an explosion during an experiment, some French newspapers believed that Alfred, “the merchant of death who made his fortune by finding a way to kill as many people as possible”, had died.
Shocked by these words, he decided to devote his immense fortune and the interests subsequently accrued by his investment funds to create a series of Nobel Prizes for those who, during the previous year, contributed the most to serve humanity.

The award money, currently close to 9 million NOK (about € 870,000.00), is divided into five equal parts: to the person who made the most important discovery or invention in the field of physics, chemical, physiology/medicine, who produced the literary work most idealistic and to the person who has done the most for the fraternity among nations, for theabolition or reduction of armies and for the training and increase of peace congresses.

Of course, the nationality of the candidates should not be taken into account in the awarding of prizes.
Nobel Prizes in physics, chemistry, medicine and literature are commonly considered to be the most prestigious in these fields.
The Nobel Peace Prize, especially lately, is often accompanied by controversy over the political evaluations that motivate it.

Upstairs, on the other hand, it is one-way politics that is the master, a clear demonstration of how unfortunately the Nobel Peace Prize has become almost the nobel for exporters of peace and democracy.

This disappointment does not make me buy souvenir in the large shop or in the bar inside.

My high school math and physics teacher used to tell us that “we are all ignorant“. There are those who take offence and those who understand that this is only the truth because we can’t know everything.
Ignorance, i.e. ignoring something, must in fact push our curiosity towards knowledge.
I had never heard of the Kon-Tiki and when I entered the museum that hosts it I was speechless.

Raise your hand if you’ve ever heard the name of Norwegian Thor Heyerdahl. And yet we should all know him.

Certain of his studies, he wanted to show that some ancient populations were capable of transoceanic travels.
He was sure that the Polynesian islands had been colonized in pre-Columbian era by the peoples of South America and not by the West.
This is because winds and currents in the Pacific generally run from east to west and also because in Polynesia there are animals and plants common in South America.

How could he prove this? In the only possible way: doing it!

Thor Heyerdahl, hydrophobic with minimal swimming ability and no experience as a sailor, built the Kon-Tiki with prehistoric materials, methods and technologies.
The balsa wood raft sailed from the port of Callao, Peru,on April 28, 1947 and reached the atoll of Raroia, now French Polynesia, on August 7.
Thor Heyerdahl, Erik Hesselberg, Bengt Danielsson, Knut Haugland, Torstein Raaby and Herman Watzinger succeeded in the incredible feat of covering about 4,500 nautical miles (about 8,000 km) in 101 days on this raft, the legendary Kon-Tiki.

In 1955 Heyerdahl organized a scientific expedition to Easter Island.
When he arrived on the island only the heads of the famous moai were visible, but thanks to his excavations it was possible to unearth the statues in their entirety.

Various experiments were also carried out on carving, transporting and positioning the moai.
With the help of only 5 people, with rudimentary techniques and tools, he managed in three days to carve an entire twelve-ton statue in volcanic tuff.
Only 18 men with ropes, a wooden sledge and a special stone base hoisted and “walked” a moai demonstrating that it was possible and also easy. 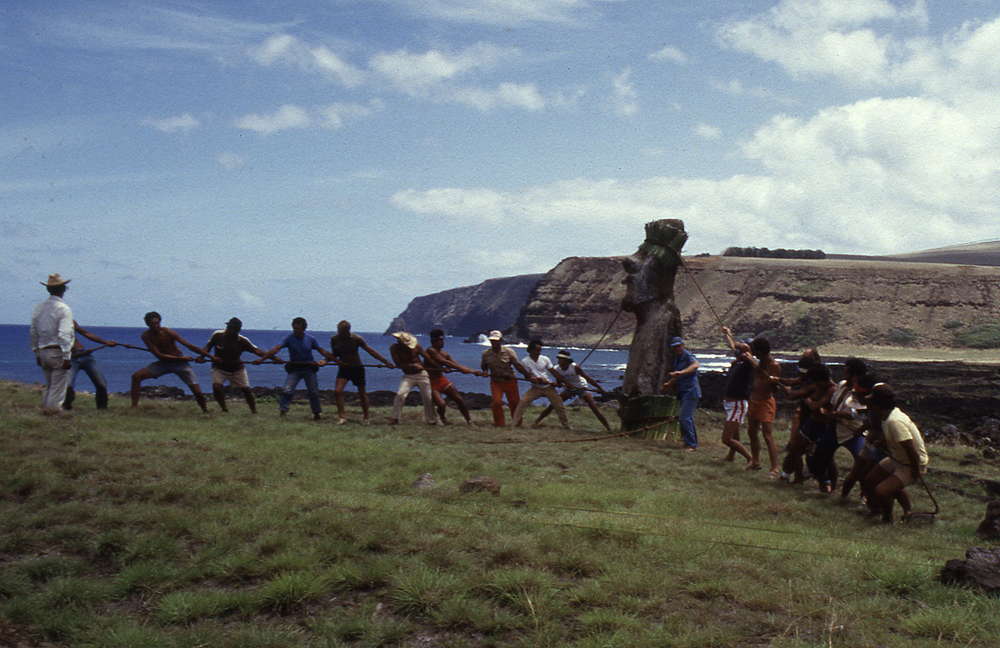 On the island he also discovered representations of reed boats with master mast and sail and was convinced that the ancient Mediterranean civilizations sailed in the Atlantic Ocean and reached Central and South America.
Again, he could only prove it by doing the same kind of trip.

In 1969, in front of the Pyramid of Cheops in Egypt, Heyerdahl built thepapyrus boat,inspired by ancient Egyptian ships, and named it Ra in honor of the Sun God.

He sailed from Safi, Morocco, but after almost 5,000 km travelled in 8 weeks, and only 160 km from the arrival, he was forced to ask for help and finish the expedition.
Due to some design errors and a broken rudder, the reeds let in a lot of water and Heyerdahl feared that the Ra would sink with all the crew on board.

Ten months later the Norwegian adventurer launched the smaller but stronger Ra II with the help of four Aymaras natives from the Bolivian area of Lake Titicaca who are used to sail with similar boats (you can still visit the floating islands on Lake Titicaca in Bolivia and Peru).

The Viking Ship Museum houses four Viking ship buried in the Oslo Fjord area: found between 1852 and 1904 in Oseberg, Gokstad, Tune and Borre.
Three of the ships contained graves that have survived to this day: the ship Oseberg should date back to the year 820 AD, the ship Gokstad just before before 900 AD and the ship Tune about 910 AD.
From the ship in Borre’s tomb (900 AD) today only iron nails remain.

The three ships had been at sea for several years before being pulled ashore and used as funeral ships. The dead were placed in special chambers on board.
They were buried with generous supplies of food and drink, various animals, and a large number of objects.

The Oseberg was used as a women’s funeral ship, while Gokstad and Tune were reserved for men.

The Gokstad ship had been in use for some years before a local commander was buried there with his many gifts: beds, boats, a tent, a sledge, dogs, horses and peacocks.
This ship is built of oak and measures 24 meters long and 5 metres wide. It’s the largest of the three, with space for 32 rowers.
The oar-holes could be closed with wooden covers when the ship was sailing.
The Gokstad reached a speed of more than twelve knots and could sail to Iceland.

Most of the items were well preserved because the ships had been buried in damp soil and covered with clay and grass, but since no jewels and weapons were found, they were supposedly looted.

Seeing Viking ships is exciting and unmissable during a trip to Oslo.

This museum too, close to the one described above, is definitely worth an accurate visit.


The ship Fram was the first ship built in Norway specifically for polar research. It was used in three important expeditions: from Fridtjof Nansen drifting on theArctic Ocean from 1893 to 1896, from Otto Sverdrup in the Arctic archipelago west of Greenland (1898-1902) and from Roald Amundsen in Antarctica for his expedition to the South Pole (1910-1912).
This means that the ship occupies a unique position in the history of exploration, having been able to reach both the North Pole and South Pole.

The Fram is really impressive and it’s easy to imagine yourself inside it when virtual images of big sea and glaciers navigation are projected on the sides.

Here you have a first approach about studies on the conquest of the North Pole. For many years the Arctic currents and winds between Greenland and Siberia have been analyzed, but all attempts to reach the North Pole through the Arctic ice failed.
That’s why it was necessary to design what would become thestrongest wooden ship ever built.

Its structure, 40 meters long and 11 meters wide, was designed so that it would not directly face the pressure of the Arctic pack, but to take advantage of the movement of the ice, climb above the pack and thus be transported adrift to the North Pole (or at least very close).
It also needed to be comfortable for the crew, who would have to spend several years on board.

The ship was built thanks to the economic support of Norway and many private citizens who were proud to contribute to its success.

Oslo amazed me and taught me many things I’d never heard of.
Because traveling for me is also discovering, learning, coming home better than when I left.
The first approach with Norway was definitely positive. Its capital city given me the adventure of his ancestors and a great sense of peace.
Not so much, as said, about the current value of the Nobel Prize, but for a general respect for nature (the cleanliness of the city is total and I had never seen so many electric and hybrid vehicles) and for people (sometimes bikes and cars stop so far from the pedestrian crossings that you don’t even realize they’re thinking about you).
I know that these topics may seem trivial for people who live in Norway or in other similar countries, but I think it’s incredible and unexpected for most of the tourists and travelers who come here.

Oslo was only the first stop of my trip to Norway, click here to discover the continuous…

how to get to the real North Cape: Knivskjellodden

Tromso: the Arctic capital where you see the Northern Lights and the Midnight Sun
0 replies