About 30 people live in Ny-Ålesund in winter and 130 in summer.
This settlement on Svalbard seems an international territory, a world fundamental scientific base especially for geologists and meteorologists.

Honestly I was expecting something more from the 3 hours spent here..
I had imagined meeting some scientists happy to explain research activities, talking about climate change, research carried out, important discoveries …

Ny-Ålesund seemed to me a ghost place, not only because of the obligation to turn off the phones so as not to disturb the signals of scientific equipment.

You can walk the avenues among the facilities that house the scientists, see the mines and spend some time in the museum that tells the whole story of Ny-Ålesund. 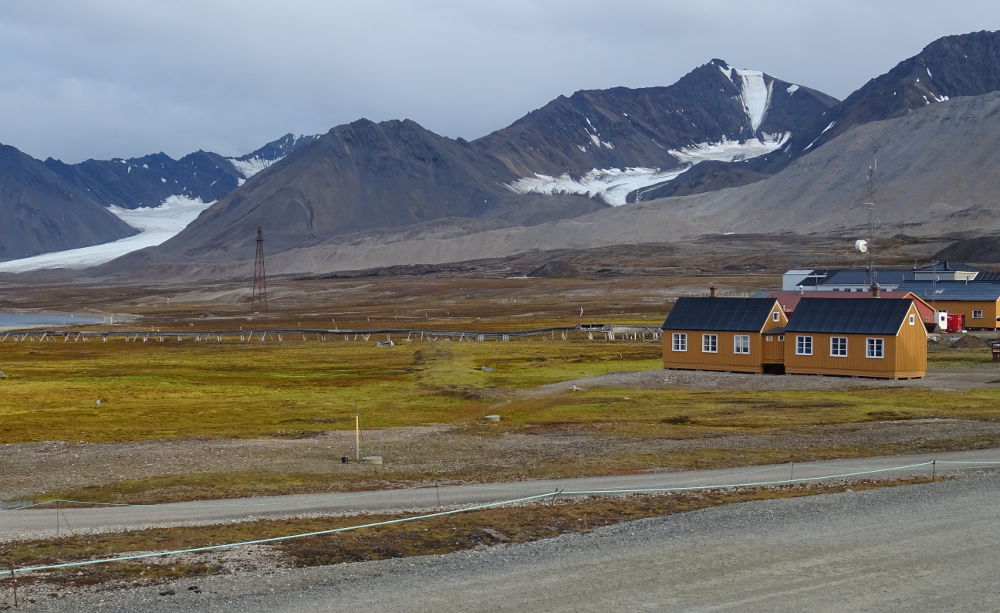 
Today seems impossible but 65 million years ago, Svalbard were covered by tropical forests. Over time, this plant material became coal, marking the beginning of the history of Ny-Ålesund (and of the whole archipelago).

In 1610 the English whaler Jonas Pool arrived in the King’s Bay and found coal, but for about 300 years the deposits remained almost intact.
The first community of 62 people spent here in the winter of 1917 and in 2 years developed a mining towncomplete with hospital, canteen, railway line, electricity and telegraph station which brought the inhabitants to around 200.

Ny-Ålesund and King’s Bay are also linked to expeditions to the North Pole..
On 10 April 1926 Umberto Nobile left Ciampino with the airship Norge and, after several stops, arrived on 7 May in the hangar prepared for Ny-Ålesund. The base was left on 11 May and the next day, at 01.30, Nobile and his little dog fox terrier Titina, the Norwegian Roald Amundsen, the crew of 6 Italians and 7 Norwegians, US financier Lincoln Ellsworth and Swedish meteorologist Finn Malmgren realized what is considered the first overflight of the North Pole..

The success of the expedition immediately brought out the rivalry between the pilot and engineer Umberto Nobile and the explorer Roald Amundsen. For this reason the Italian immediately organized a new expedition to the North Pole.
On 15 April 1928 the airship Italia left Milan, arrived in Ny-Ålesund on 6 May and, after a few exploratory flights, reached the North Pole on 24 May.
However, the return was tragic.
The strong headwind created problems and the airship precipitated in the pack, about 250 km from Ny-Ålesund.
Ten men, including Nobile, were thrown to the ground. Against the cold they had the good fortune that, among the various fallen objects, there was also a field tent. They colored it red with aniline to make themselves visible to any relief and that tent became famous as “the red tent“.
The airship Italia resumed altitude and disappeared forever, along with the 6 men left on board.

The international rescue efforts by Italy, Norway, oviet Union, France, Germany, Finland and Sweden were enormous.
Naval, air and land vehicles were used, but it was only after 48 days that everyone could be saved.
9 rescuers died in the search operations and among them there was also Roald Amundsen who, despite the rivalry, immediately undertook to save the crew.
His seaplane disappeared in the Arctic Ocean and even his body was never found.

The great economic crisis of 1929 led to the closure of all the Ny-Ålesund mines.
The town was then converted into afishing stationand the main housing of the miners became “North Pole Hotel“, with 12 rooms.
In September 1939 the Second World War broke out and the fishing station and the hotel were closed.
The inhabitants remained for another 2 years, until the total evacuation, when Svalbard Islands became strategically important in the war.

In 1945 the mining activities resumed, the mines were modernized and new structures were built.
But on November 5, 1962 the worst accident took the lives of 21 miners, 11 of whom were never found.
The fierce controversy led to the closure of the mines and to the almost total abandonment of Ny-Ålesund.

In the winter of 1964, 5 researchers from East Germany settled here for their research.
And since then scientists have never left.

Scientists from around 20 countries use the Ny-Ålesund research base for studies in:

– atmospheric sciences: pollution in the Arctic, measurement of air and gas particles, research on the aurora borealis, sampling of land, water, air, snow and ice;

– marine studies: sealifefood and ecology network, pollution, sampling of sediments from the seabed and plankton at different depths;

– terrestrial research: effects of climate change on the ecosystem, temperature and extension of permafrost, colonization of areas where glaciers are withdrawn (for example, the pelican geese population has gone from 250 in 1943 and at least 30,000 today), studies on microbes , insects, birds and mammals;

– research about snow and ice: properties of snow and glaciers that disappear and increase, use of ice thickness to read the climate archive, analysis of the amount of soot present in the snow (soot reduces the surface’s ability to reflect the solar radiation).

Trondheim: wooden houses on the fjord and Nidaros Cathedral
2 replies