It’s now impossible to pay flights € 0,01 but I will continue to defend the irish Ryanair, which has revolutionized the way of travel, allowing millions of people to get on a plane with a few euros.
I still have the idea that it is just a connection between two city.

I only care, for example, to reach Belfast and return to Cagliari for only € 30,00.

George Best Belfast City Airport, dedicated in 2006 to one of its most famous citizens, is located adjacent to the port, just 5 km from the city center. Its flights mainly connect the island to the United Kingdom, with some seasonal flights to Barcelona, Amsterdam or Brussels.

Belfast International Airport has connections with all of Europe, Cuba and United States.
To reach the Europa Buscentre central station it takes about 40 minutes with the Express Bus 300.
Tickets can be bought in the information desk inside the airport (excellent service, with maps and information on everything the Irish island offers, free and multilanguage) or directly on board (but it could be the exact amount, driver does not always have the rest).
The cost is £ 8 one way, £ 11 including return.
No prohibition for those who want to spend the night into the airport. But the place is not very friendly: uncomfortable chairs, lights on and staff skeaking all night while cleaning.

Experience and safety are always required to drive a car. Here obviously drive in anglosaxon way and I prefer not to risk a frontal car crash.

Using public transport is easy and cheap.
There is a day pass to take every public transport and travel throughout Northern Ireland. It’s called iLink Zone4 and costs 17 £.
You have to ask for it specifically, not always at the station benches they offer, preferring to sell the most expensive single tickets.

There are direct connections between Belfast and Derry airports with airporter.co.uk mini buses.
In this case the rates are £ 20 for a single person trip (£ 30 with return), £ 15 and £ 25 if you are traveling with more than 2 people, £ 10 and £ 15 for passengers under 16 years.

Much of Belfast’s history is focused to the war that divides Irish nationalist Catholics and Protestant British unionists from over 800 years.

The streets of the city have seen over 1,500 deaths and hate doesn’t close into a coffin, but from there it comes out with greater power.

Murals represent the history and culture of Ireland and show the clear and visible division between the respective neighborhoods. And the same is true for different colors of sidewalks and light poles (tricolor greenwhiteorange in Irish area, redwhiteblue in English area) and an always tense and wary atmosphere.

There are many walking or taxi tours but I always prefer to walk around in search of something different from the classic visions.

The murals fill the streets around Falls Road.

Beyond the images of friends and relatives who lost their lives and supported the IRA, there are independentist links (dedications to the Basque Country e Catalonia), leftists (Palestina, Cuba and those who came from all over the world to support this cause.

Near the central station, a large mural indicates the arrival in Sandy Row. Here in 1866 the Linfield FC was founded, a team where there are only Protestant players, even if not officially.
A pub with stained glass windows often damaged is the home of Glasgow Rangers Fans, Scottish team supported in the city for its bond with the Protestants.

The Unionist population lives mainly in the Shankill Road area. During the war, the “Shankill Butchers” group became very famous.

On July 12, the “Glorious Twelfth” for Protestants, is still celebrated by invoking the death of Catholics, like that day in 1690 when the Protestant King William III of Orange defeated the Catholic King James II in the Battle of the River Boyne, sanctioning the predominance of English and Scottish Protestant settlers on Irish Catholic nationalists.
The parade is always a symbol of clashes and injuries between the two factions.

The murals here have constant references to the English sovereigns, to friends and relatives killed and in favor of the UDA and UVF paramilitary groups, greater responsible for deaths of Catholics. 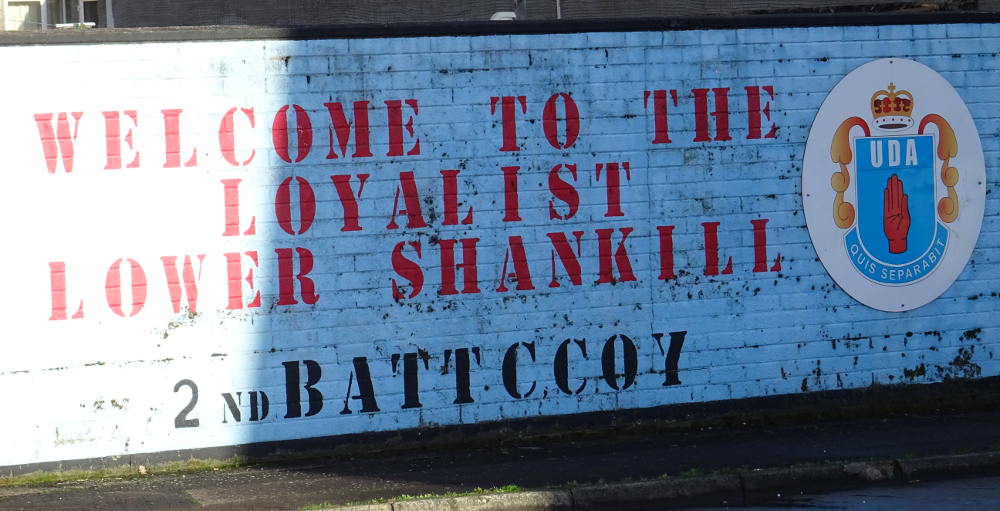 If the colors of murals, sidewalks and poles represent the different communities, nothing is clearer than the high partition wall, still indispensable that gates are closed every day from 8pm to 6am, physically separating the two enemies communities.

Belfast is really divided into two opposite parts constantly at war. Only the almost constant rain makes you see the colors of a peace far from being reached.

Beyond that, Belfast was the world center specializing in shipbuilding. From the Harland and Wolff Shipyard also came out Titanic. Visiting the museum is therefore not to be missed even if perhaps I came out a little disappointed.

The museum is inside a structure that reminds me of the Guggenheim in Bilbo/Bilbao.
I thought to find a faithful reconstruction of the ship instead everything is centered on its construction (beautiful the route in the train to understand the working conditions) and on its only journey, started from Belfast and finished undersea.

Outside the museum there is the Nomadic Ship, the Titanic’s younger sister and the last ship of the White Star company.
The cumulative ticket costs £ 18.50 and it is certainly worth entering the empty corridors to imagine yourself in that fatal 15 April 1912.

Nearby there is also the SSE Arena Belfast.
The flags in the wind and the scarves around the fans pushed me to see an ice hockey match for the first time, the IIHF final which saw the Belfast Giants defeat on penalties.

Using the iLink Zone4, you can (and should) spend a few days exploring the city of Derry and The Giant’s Causeway, a place so unusual that many legends surrond it.

Magdalenfjorden and 80th parallel North: here you are the polar bear
0 replies