LONGYEARBYEN: TRIP TO THE END OF THE WORLD

Gate 20 is on the lower level of Tromso airport and walking in the grey corridors seems to have already left Norway.
The passage to customs for passport control marks the exit from the Schengen areaand leads to the waiting room.

I’m a little disappointed, realizing that the plane will be full. I thought I was one of the few who pushed me so far north and instead there are many tourists of all ages. There are few travelers with dreams inside the backpacker.
Boarding is fast and the flight almost always proceeds through the clouds and with so many bumps. 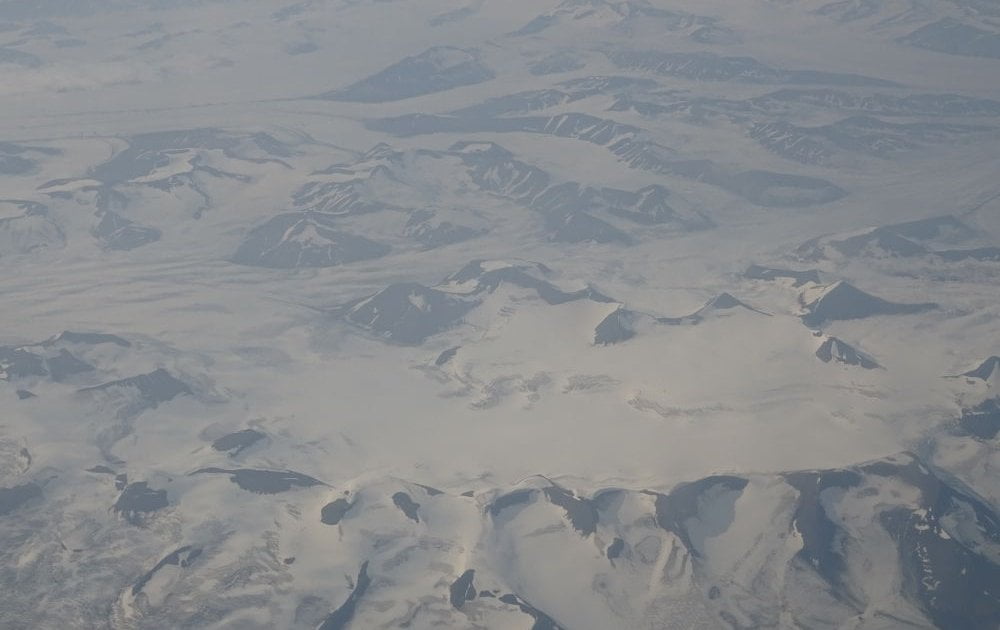 Beginning the descent you finally see the peaks of the rugged mountains among the endless perennial glaciers.
They occupy 60% of the territory of Svalbard, against 27% of stones and 13% of low vegetation.
There are no trees. And not even insects.
Upon arrival the sky is clear, the sea is calm, the cars are parked almost on the edge of the track, the huskies run in the grass pulling the tourists on the sledges.

Is August and he sun is up 24 hours a day, the famous midnight sun. In a few weeks it will return to fall below the horizon as it has not happened for 4 months.
Will arrive snow and the northern lights, but also the total darkness. It will be the turn of thelong polar night. For 4 months.
It is the cycle of nature at these latitudes.
Hard to imagine for those who don’t try it.
Difficult to live for those who do not grow there.

Longyearbyen is the most populous city in Svalbard with just over 2,000 inhabitants.
The polar bears that occupy the islands should be over 3,000.

Buses outside the airport are almost a collective taxi. You tell your destination to the driver and he leaves the airport when most of the seats are occupied. If you have already booked an excursion on the Hurtigruten you could have the route included, otherwise the ticket costs around 75 korone, payable on board with a card.
The road runs along the sea, past the Toyota dealer and then turn right into the main street of Longyearbyen. 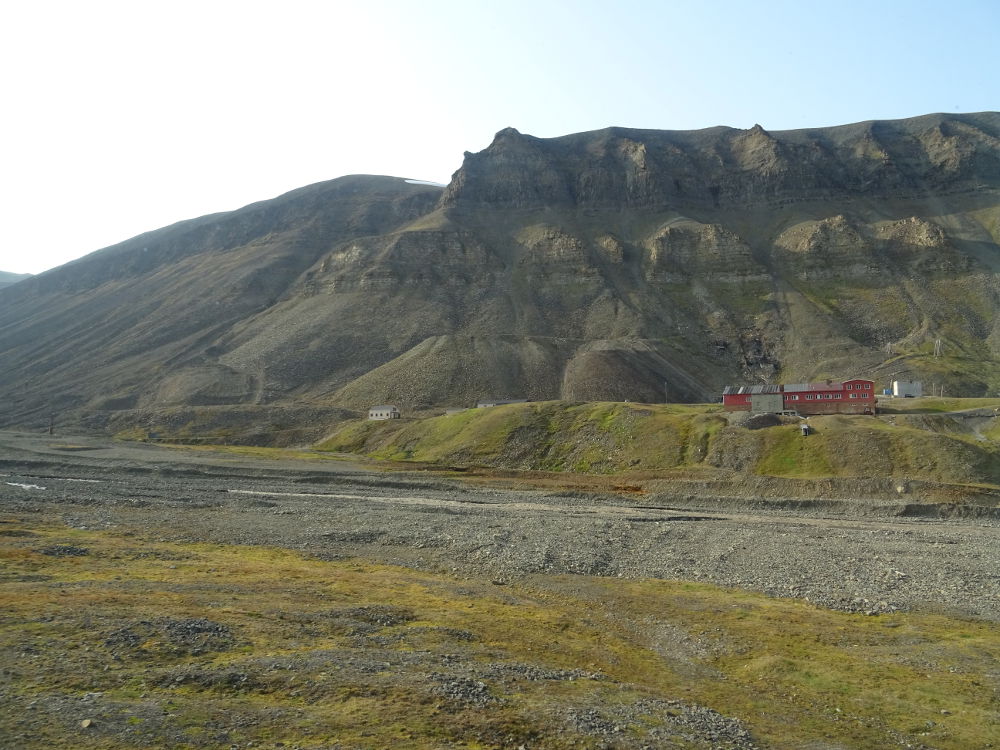 The houses are low, earth and stones do not leave much room for the tundra. The trees do not grow here.

From the window I look for landmarks: on the left a museum, a few souvenir shops, first stop at the Radisson Blu Polar Hotel, pass the market and arrive at the Basecamp Hotel, Svalbard Hotel, Gjestehuset 102 and then, with the bus now empty , it’s my turn down. 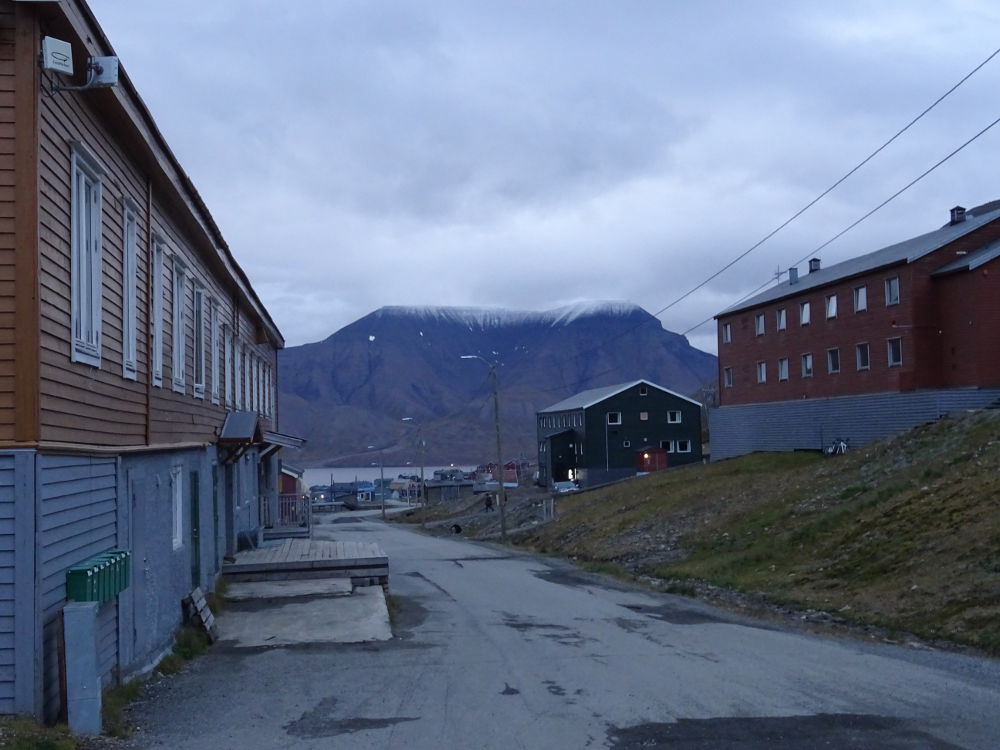 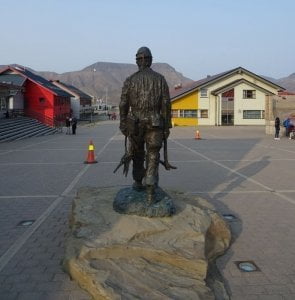 I had chosen the Coal Miners’ Cabins before the Hurtigruten proposed it to me.
It seemed the most authentic.

The link between Longyearbyen and the mines begins with the name of the city, founded in 1906 by mining entrepreneur John Munroe Longyear. Coal miners lived in these cabins and some traditions remained.
Starting from leaving the shoes at the entrance, like the miners did with their dirty boots.

The reception booth is welcoming with a small souvenir shop, sofas to pass the time choosing which excursion to do (only Hurtigruten proposals) and, at the end, the tables where to have breakfast in the morning (in Nordic style and with little choice ).
The staff is very kind and prepared on every request.
Rooms are spacious and clean, without TV but with good wifi (to restart every 2 hours).
There are at least 4 bathrooms with showers on each floor, I had never found them all occupied at the same time.
The center of Longyearbyen can only be reached on foot in about 20/30 minutes.

On the way it is likely to see reindeer and arctic foxes roaming undisturbed along the streets or near the houses. 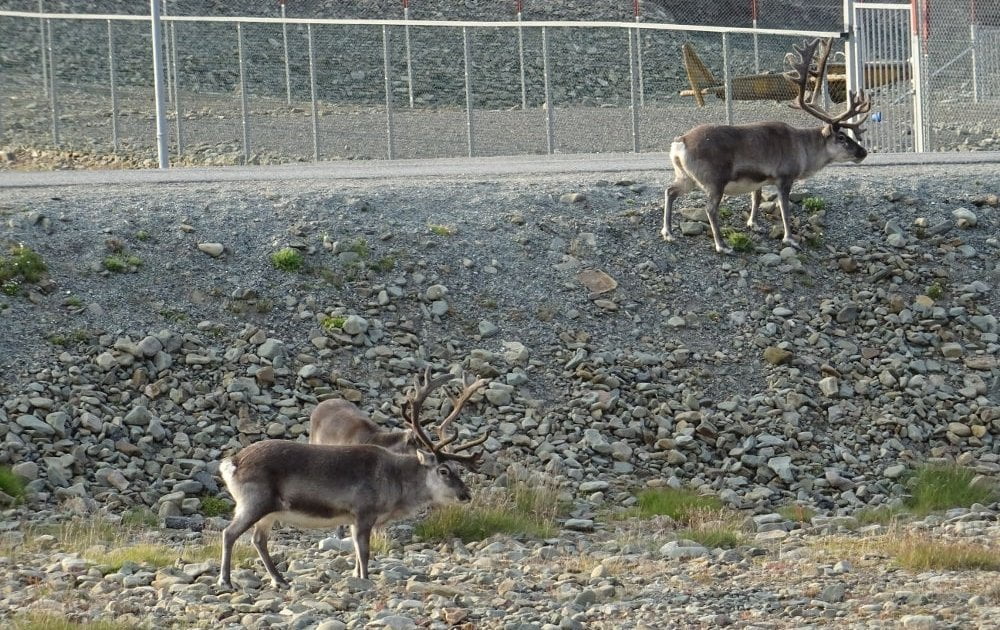 THINGS TO DO IN LONGYEARBYEN

Two days are enough to see all the corners of the city.
Don’t be scared knowing that the streets have no names. It is not possible to get lost among containers, industrial buildings and low colored houses.
It is far more important to always be careful not to leave the town to go on solo excursions.
The danger of bears is real and the signs are not folkloristic. The guides always have a rifle with them and they know how to use it (killing the bear is the last of the possible choices and it risks a salty fine even those who frighten it without there being any real need). House doors are usually open to allow quick access at any time.

the small museum stands at the beginning of the town, in the same building of the university. Here you have the first great approach to life in the Arctic. Protagonists are animals. They have – or should have – their habitat: polar bears, whales, seals, walruses, foxes and various species of birds.
I don’t like seeing stuffed animals and so I keep more on the reading about the glaciers and the life of the miners up here, where the Arctic circle seems as far away as the equator maybe for us.

In the street parallel to the sea, almost behind the Svalbard Museum, there is the North Pole Expedition Museum.
Leaving the shoes at the entrance, you enter this two-story museum, where enthusiasts and the curious can spend some time between videos and original documents that explain the history of expeditions to the North Pole.
Since the private organizer of this museum is Italian, most of his collections concern Umberto Nobile and his expedition to the North Pole with the Italian airship, after having already reached it a few years earlier with the Norge.
It is very interesting to read the preparatory phases up to the international research for the recovery of the survivors of the crash on the pack on the way back.
The only negative note is the prohibition of taking photos. Rest of the idea that they are the most important tool to attract visitors, and not to empty museums with the motivation of “having already seen everything in the picture”. 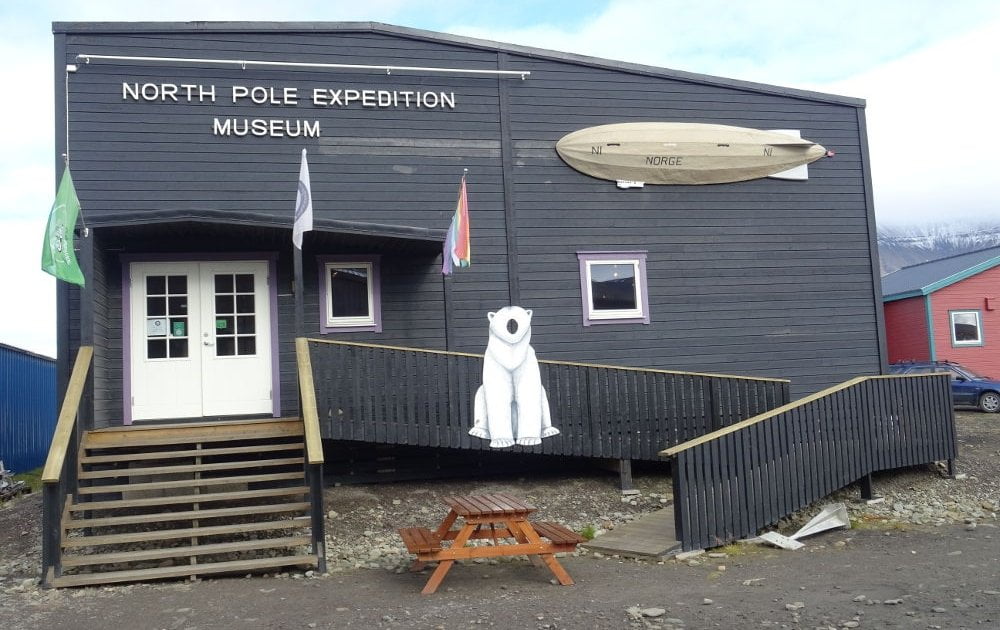 The red wooden structure above the hill is the church that was built after the Second World War, in place of the one destroyed by German bombing.
Besides being a church, it is certainly a meeting point for the inhabitants. Inside there is in fact a room with chairs and tables where you can take advantage of the books available in front of a cup of coffee.
From the outside, you have a view of the city from above. 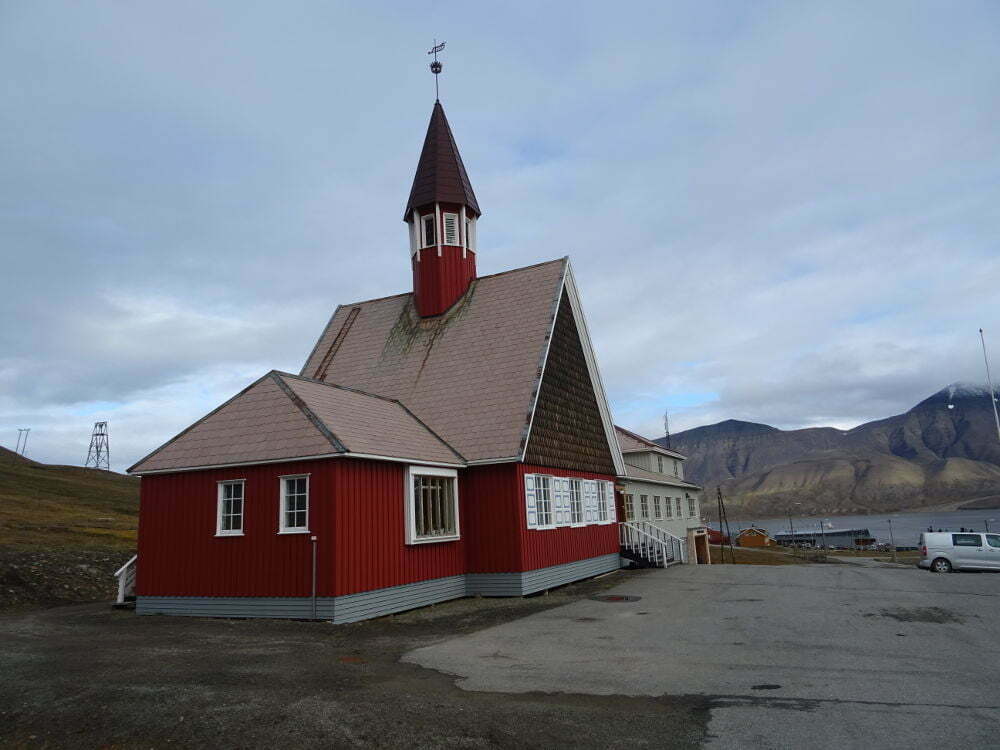 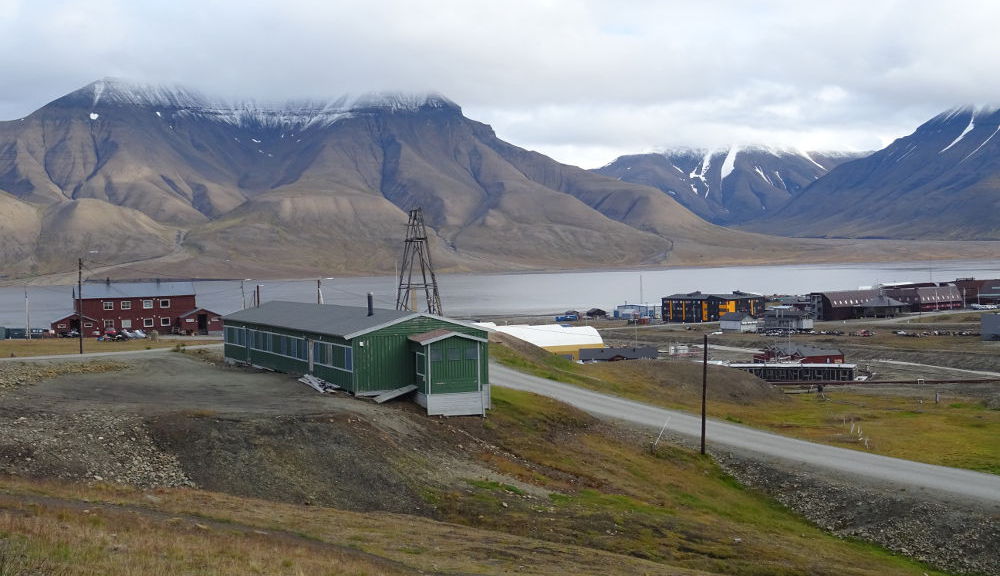 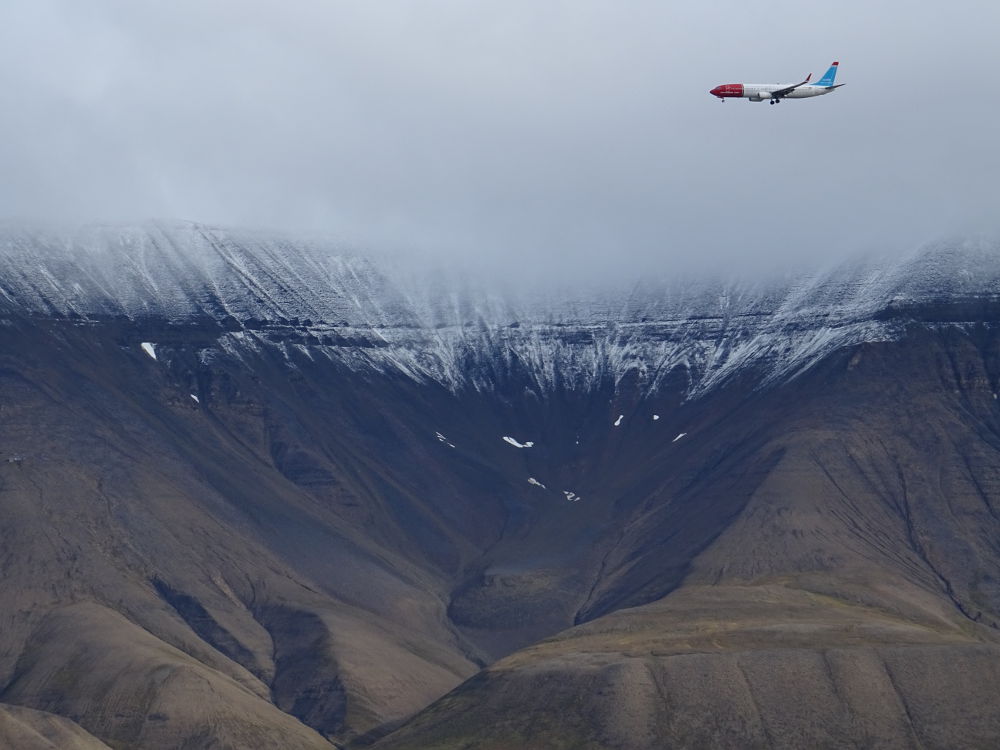 
A few hundred meters before the church there is a small cemetery of white crosses. Below are the ashes of some Spanish flu victims, who killed nearly 5% of the world’s population at the time between 1917 and 1920.
After exhuming the bodies in the 1930s, it was noticed that the arctic climate prevented their decomposition and allowed the virus to die. For this reason the bodies were cremated and since then there is not even a cemetery at Svalbard. Older people are forced to spend the last years of their lives away from here.
Longyearbyen is precisely called the city where one cannot die.
And where you can’t even born. The hospital is not equipped and pregnant women must go to Tromso 3 weeks before birth. 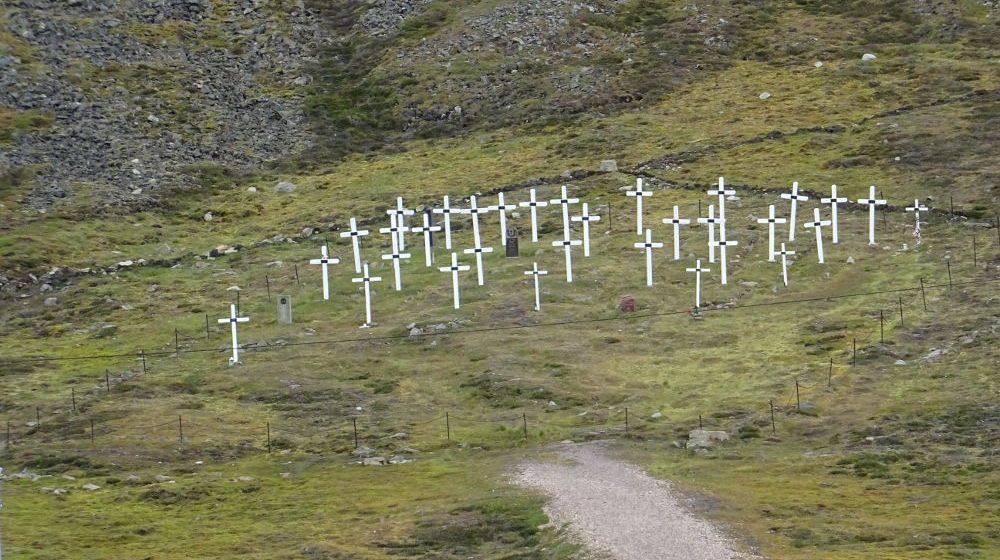 
Inside the hill behind the airport is the Svalbard Global Seed Vault, the global store of agricultural seeds.
In reinforced concrete halls, with thick steel doors resistant to nuclear explosions, the genetic heritage is conserved to prevent accidental losses or due to wars and environmental disasters and to allow it to be used when needed.
Currently it is not possible to visit until the end of the works to prevent water infiltration, due to the melting of the glaciers around the structure. 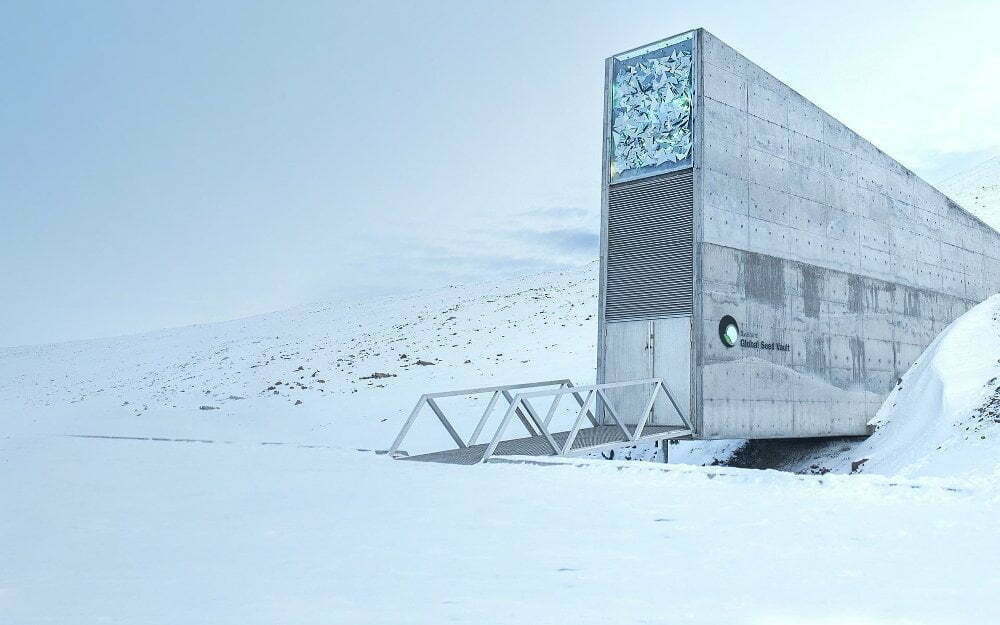 Longyearbyen must however be considered as a starting point for excursions.
In fact, I don’t think it makes much sense to go up here and not participate in an arctic expedition of a few days with Hurtigruten, at least until you pass the 80th parallel north.

In the hotel and in the info point you will have to chose from a lot of excursions to do.
You can get on a sleigh pulled by huskies or push yourself out of Longyearbyen with a snowmobile, take a bike or off-road tour.

Among the many agencies, I had a great time withHenningsen Transport & Guiding. I chose them for the daily boat trip to Pyramiden. The price was similar to other offers but nobody approached the duration of about 10 hours.
Everything went very well: a kind and prepared guide, a lunch worthy of michelin stars, the possibility of staying in the cabin with a privileged view.
Thanks to them I saw polar bears and belugas. Their merit was to stop at the right time and have them identified.
Untrained eyes would otherwise have been impossible.
I would recommend their professionalism even for excursions to Barentsburg and to glaciers. 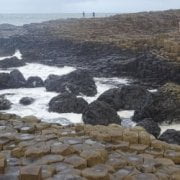 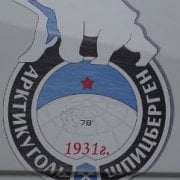 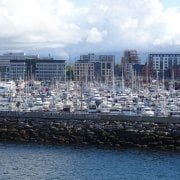 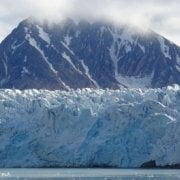 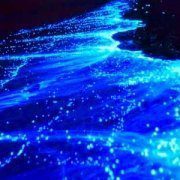